Single Thoughts of a Houston Chick

Many factors come into play with deal breakers with me.  Bad sex is definitely one of them.  I was in relationships in the past and I subjected myself to unemotional terrible sex and honestly, every woman deserves to be pleased sexually and satisfied.
I’ve realized that I know my body enough to know what definitely doesn’t feel good to me and what is a sure fire omg moment to have me getting vivid flashbacks the next day.
My date sadly was a no Bueno we talked a few weeks before taking it offline and met for Mexican food at one of the Places I Loved.  We Had A Night Cap And It Was Awful, Usually When I Have A Decent Connection With Someone The Sex Is Usually Just As Great.  We Both Knew It Was Not Good,  I Assumed we needed More Time 5 Nights After Our  Initial trist he Tried To start up another sex episode this was just as bad as the first I tried to nicely show him things I liked after the 6th reminder he said I had too many rules and he does this with every woman and he didn’t see the issue with what he was doing .(I’m assuming my lack of orgasms and dry vagina shown no signs to him) when  I tried to talk to him nicely about how to please me he basically stated to me  he knew what he was doing and since no women complained about his sex skills  it  was me overthinking everything  not relaxing and  enjoying this experience .

I have had 3 instances in my life where I had Awful sex and he was one of them I would like to say that’s not to bad considering the men that I have had little to no connection with please me better than this man had.

so then the awkward texts started  : 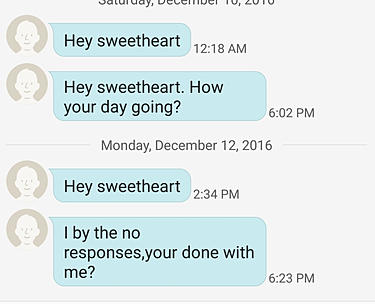 So I felt bad not responding and felt like I liked him enough that he was deserving of a response so I replied as nicely as I could and as respectful as possible and that was an utter mistake. 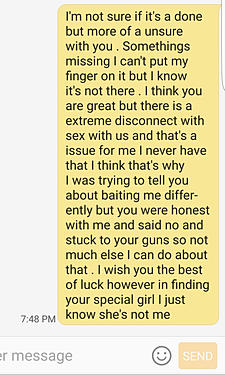 OMG!!!!!! *FIGHTS AIR*** see this is why I should have shut the hell up and just not responded whatsoever!!. ok, let us break this all down  :
1. There was definitely a sexual disconnect with us since everything else we vibed perfectly
2. I am very much a strong-minded woman except in the bedroom I am extremely submissive any man that cant makes me submit there is a disconnect point blank period.
3. I don’t mind biting but I hate hard rough biting where I am no longer concentrating on sex but that not sexual pain.
4. the fact that he stated his way has worked but hasn’t taken into consideration when he told me he has been one night standed more than he cared to mention speaks volumes about how clueless he is about the female body just because you impregnate a woman doesn’t mean you know anything about pleasing one.
5. he never “tried it my way”.
*original blog post-December 2016*

Ghost men are your blessing blockers

Single in the city: now that’s how you have a first date

My exes are bitter

My name is Kay, I am a Proud Texan, Mom of 2 genius babies lol and a Fur-mom. I love Fashion, Tacos & shoes. But I have realized over the last few years I am a serial dater I have stories for days most are crazy, sexy cool lol. I started sharing them with friends a few years back and thought it would be neat to journal my lessons on my blog. On my blog, you get a view of crazy dating scenarios and the lessons I have learned from them all, Fashion ideas, and also my frustrations since I chopped all my hair off and went natural.
View all posts by KayDarden →