Single Thoughts of a Houston Chick

No need to wonder what it’s like to date a snake because if you’re dating a narcissist then you already know. They’re sly, stealthy, and experts in the use of manipulation.

Not in the beginning, though.

Nope, in the beginning, dating a narcissist will be awesome. He will treat you like a queen. You’ll think that he is “the one” for you and you’re definitely on the right track.

It may be like a whirlwind romance. He will push for fast exclusivity and it will feel good. Maybe you’ll even move in together or say “I love you” after a few days or weeks. You might find yourself in bed with him earlier than what is normal for you.

In short, he sweeps you off your feet and makes you feel like this relationship will be a keeper.

Up on his pedestal you’ll sit for a while until one day you come tumbling down.

In utter disappointment, he will get upset with you over something probably insignificant. From that point on, you will desperately try to regain your position atop his pedestal.

Unfortunately, you never will. But now that you’re willing to try, he’s got you where he wants you – desperate and distracted.

Manipulated distraction is the hook, line, and sinker of a narcissist.

2. What He Says and What He Does Don’t Match
If you’re like most women, you want so badly to find someone you can trust.

Bad news – a narcissist will tell you one thing then do another. He often defends his actions with a nugget of truth amidst a huge lie. (also known as Gaslighting )

Narcissists are pathological liars and his little nugget of truth strategy is meant to keep you distracted. (Gaslighting)

For instance, to distract you from his own behavior he will accuse you of something, point out a supposed weakness of yours, or take a dig at a past wound.(Gaslighting)

For instance, I dated this Pisces named Jamal he  loved to get  involved with these deep intimate conversations with me get upset if I wasn’t available for him when he wanted me to be  and then poof go ghosts for weeks  on end  only to come back like nothing happened . When we got a chance to talk about  his  behavior  and how it’s not ok , he would accuse me  of  “being sensitive” “overreacting” or “yelling” (I most definitely did not yell at him)  at his narcissistic behavior.

The truth was that no matter How I felt  I was always  on edge with him like I could not hold a decent adult conversation with him ,  I also grew tired of our conversations of what I called a circle  of madness

I was the one that needed to change. I was the one with issues and if only I would change, our relationship could flourish. When you’re dating a narcissist, this is a common theme – you’re the problem.

A narcissist not only attempts to rewrite reality, but also history.

He will belittle the traumatic truth, tell you that you had no right to be scared, or even recall past events much differently than you do (gaslighting).

A narcissist will use any trick in the book to keep you distracted from his awful behavior and make you doubt your sanity.

3. Bloated Sense of Entitlement
When you’re dating a narcissist, you’ll soon come to know that your guy is a lot like Machiavelli from the Renaissance. He’s entitled and very, very “special.”

A narcissist will live above the law. He’ll act in a way that defines his superiority status. He feels that he deserves to get special treatment or like the world owes him.

His parents might have bailed him out of jail in his past because he “hadn’t done anything wrong.” It’s more common than you think AND it’s a huge red flag.

My ex would attempt to use his connections to get a deal or get special treatment. He was a purple Heart and  it was a ongoing forever pissing  contest with him and other men and  lord forbid that man is also in the  military.

for example: My children’s father (ex husband) was in the  military as well and accomplished  in his  own right but he would find  numerous ways to speak poorly  of him and  when I would correct him I wanted him and  he would question my intelligence because  I should hate him and also go along with him bashing him.

In a relationship with a narcissist, your decision will also never be the right one. He will try to directly or indirectly make all your decisions for you.

These decisions will all be made under the geize of “doing what’s best for you.” 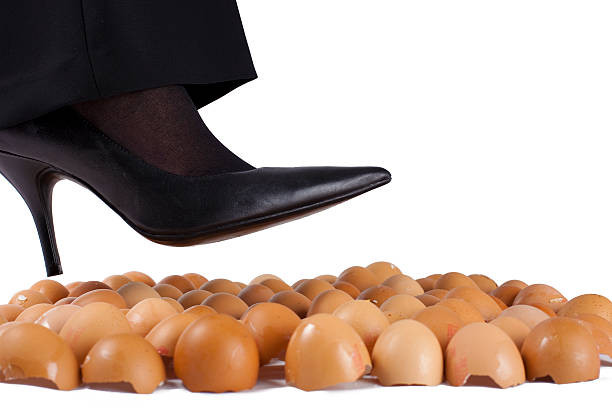 4. Walk on Eggshells
Being able to tell that you’re dating a narcissist is very, very tricky.

Normal women do not watch out for these outrageous behaviors because normal men don’t conduct their lives this way.

Narcissists are abnormal, but one of the easiest ways to tell you’re in a relationship you ought not be is how you feel.

When you’re with a narcissist you will know right off the bat how normal he is by how he handles any form of rejection.

Don’t do what he wants = temper tantrum.

Oh, but the man will do his trickster best to justify this immature behavior.

When you’re dating a narcissist, you walk on eggshells. It becomes the norm in your daily life.

You second guess what you say, what you do, which route you take home from work, what you wear, everything.

You’re clueless as to what could possibly set him off next, so you live in a state of anxiety.

5. You Feel Isolated
The last thing I’m going to review about when you’re dating a narcissist is the fact that he will try to isolate you.

From friends, family, co-workers, and anyone who could possibly reveal to you his wolf in sheep’s clothing – he’ll try to break off your connection with them.

It won’t happen all at once. In fact, he’ll probably appear as Prince Charming to them just as he appeared to you in the beginning.

They won’t see what you see when he drops his mask. They may even defend him, which isolates you more.

When you’re dating a narcissist, he will do his best to crush any source of internal or external strength or support. His goal is to cut you off so that you’re alone and most importantly so that you feel alone.

A narcissist will try to isolate you & more importantly, to make you FEEL alone.

The most common way a narcissist accomplishes this is by convincing you that you’ve “outgrown” your friends or family. He might even say that they are no longer a good influence on you.

Of course, when you do go out and about, you will be watched like a hawk.

Accusations of infidelity or secrecy will spew from his mouth…even upon returning from a harmless shopping trip or lunch with your BFF.

You’ll start to ask for permission to leave the house and become frantic when you’re caught up in traffic or decide to take a different route home. Being late means facing a volcano at home…

The Take Home Message
When you’re dating a narcissist, it’s easy to miss over these insane behaviors. Like mentioned before, these things are normal and normal women have no reason to watch out for them…until a narcissist arrives on the scene.

Remember that all abusers are narcissists, but not all narcissists are abusers.

Not sure if your guy is an abusive narcissist, check out my list of pre-abusive behaviors here.

We honor boundaries around here

My name is Kay, I am a Proud Texan, Mom of 2 genius babies lol and a Fur-mom. I love Fashion, Tacos & shoes. But I have realized over the last few years I am a serial dater I have stories for days most are crazy, sexy cool lol. I started sharing them with friends a few years back and thought it would be neat to journal my lessons on my blog. On my blog, you get a view of crazy dating scenarios and the lessons I have learned from them all, Fashion ideas, and also my frustrations since I chopped all my hair off and went natural.
View all posts by KayDarden →